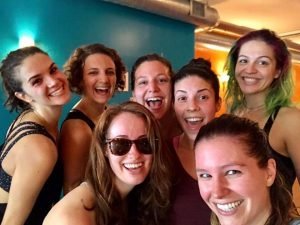 Joan Heider is a feminist and proud of it! When she isn’t at a Philly Dance Fitness class or managing public relations for a local law firm, Joan is doing what she can to speak out about the importance of the feminist movement. From representing the USA Women’s Hockey Team to attending a Supreme Court hearing on abortion, Joan has made it her business to fight for women’s voices to be heard. Read on to learn more about Joan and her mission to take the stigma out of being a feminist.

Philly Dance Fitness: What got you into dance?

Joan Heider: I started taking dance and gymnastics classes when I was in preschool. I really didn’t want to go, but my mom was like, “You have to try it, just try one class!” I loved it, obviously. I stuck with it growing up and took all kinds of classes — ballet, tap, jazz — in conjunction with musical theater.  I’m a terrible actor so there was no hope of actually making anything of it, but it was always a place where I felt comfortable and like I fit in.

Why did you become a member of Philly Dance Fitness?
After I graduated from Penn, I was trying to find a young professional identity. When you’re in school, you don’t really have a lot of free time. When you graduate and get a job, you work from 9-5 and then you’re like, “Now what do I do?” So I turned back to dance. I had walked by the South Street studio and saw the classes in there. One Sunday morning I went to Dance Party Boot Camp. I looked at Sherrilyn, who was subbing that week, and I was like, “I would like to look like her.” So I took that class and bought a 10 Class Card. I was going through them really quickly because every class I tried, I loved. I was like, “I’m just going to get a Membership!”

The instructors are excellent, and the classes are well-paced, fun, a great workout and a great way to relieve stress. The best part that I have found about Philly Dance Fitness is the lovely community of strong, thoughtful, powerful, empowered women. It’s a woman-run company — Deb does such a fantastic job. I also love my instructors, and I’ve become friends with them. I’m so grateful to have found this community, really.

What are your favorite classes?
Timaree’s Dance Party Boot Camp and Cardio Pop, Brooke’s House Party Fitness, Lehla’s Zumba class, Maureen’s POUND class…I also love Emily’s Stretch & Sculpt, she’s great. I never anticipated loving it, but I go and I feel stretched and sculpted and relaxed and centered all at once. I’ve found that I want to go to class every day, not because I want to work out every day, but because I’m like, “I don’t want to miss this class.” This past week I went to six classes, six out of seven days because I was like, “I gotta see Emily, I gotta see Timaree, I gotta see everyone.”

Tell us about your job.
I do PR for a big law firm. We have 650 lawyers in 15 offices. I’m the Media Relations Manager so I handle all of the press. What people think I do when I say I do PR for a law firm is that I “hide a bunch of terrible stuff,” but it’s not that at all. It’s positioning lawyers as thought leaders in their area of the law.

This firm has a really active pro-bono practice, and I’m very fortunate to be included in some of the awesome work that we do. We represented the US Women’s Hockey Team in their fight for equitable pay. USA Hockey was putting disproportionate amounts of funding and resources into the men’s and boys’ programs. In spring 2017, the women had their world championship and decided to boycott it until USA Hockey would negotiate with them for equitable pay and better programs for women and girls. I ended up managing the firm’s PR and also worked directly with the players to manage their own PR campaign. They were eight-time world champions and they were definitely poised to win the gold at the winter Olympics, and they weren’t getting proper support. It was really exciting to be a part of this case. 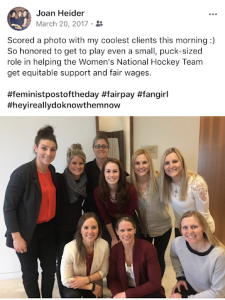 How did you get into activism?
I’m generally interested in the intersectional feminist cause that promotes women’s rights, as well as reproductive and abortion rights. I spent the last year and a half being a part of The Young Advocates for Planned Parenthood. I helped plan their fundraisers and make the conversation about women’s rights, feminism and abortion rights. I really believe that it’s a grassroots thing. The more I talk about it, the more other people talk about it, the more people feel comfortable talking about it, the more we reduce stigma. The idea of women asking for what they deserve — it’s a very uncomfortable situation. They don’t feel comfortable asking for fair pay, they don’t feel comfortable saying no in romantic and sexual situations. I’m not an expert on this stuff by any means, but I try to do a #feministpostoftheday on Facebook and show people I’m proud to be a feminist. Never has anything been more indicative of the problem of the patriarchy than the negative connotation around the word feminism. Anything that’s pro-women people are like, “Ew, that’s ugly and gross and ridiculous.” So I try to be like, “Look, I’m not ugly or gross or ridiculous, and I think this stuff is important.” 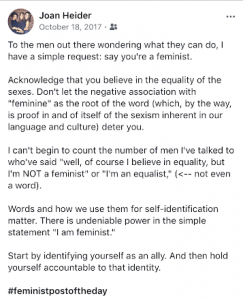 What is one of the most memorable activism experiences you’ve had?
A couple of years ago, I was reading a Washington Post article about a woman who said, “I’m pro-choice, I’ve always been pro-choice, but I’m quietly pro-choice and the people who are anti-choice are not quiet about it. They are out there fighting every day to take away a woman’s right to abortion.” She said we all need to be louder about it, and I read that article and I was like, “Oh, yes.” After that, I went to D.C. to hear an oral argument at a Supreme Court case addressing “Targeted Regulation of Abortion Providers” laws, which stated that abortion clinics had to meet certain medical requirements — which were completely unnecessary and unattainable — and if the clinics couldn’t meet these requirements they would be shut down. 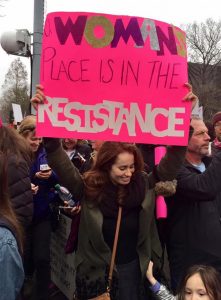 Joan making her opinions clear during a march in Washington, D.C.

The laws got challenged in the courts and they worked their way up to the Supreme Court. I wanted to be a part of the protest and make sure I was being vocal. I’m not going to be quiet about it, and none of us should be quiet about it, because safe and legal access to abortion is so essential to any woman’s right to determine the course of her own life.

There’s such power in writing and words and language, and that’s why I write about these things on social media. It’s interesting that I meet or see people I haven’t seen in years and they’ll say to me, “I love your feminist post of the day,” but they don’t comment or “like” them online. They don’t interact with them because they’re so taboo — even to “like” someone else’s status on Facebook about abortion or rape culture or general women’s issues. Until recently it has not been a popular cause. Thankfully, it is now. I’m thrilled about it and it’s nice to see people come out of the closet and support it.

What relationships, if any, do you find between activism and dance?
The people I’ve met through dance are so supportive and are on the same page. It’s a group of really enlightened and thoughtful women who agree that it’s essential to give voices to people who are otherwise not given a voice — making sure they are included in the conversation and making sure the conversation is being had. Timaree, for example, is a sex-positive activist and a big old feminist activist, and she has MC’d Planned Parenthood events for me. There’s strength in numbers and I’m finding that the women I’ve become friends with through dance are such a solid base for promoting these causes. They help me understand them and they teach me. 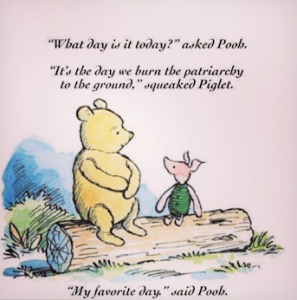