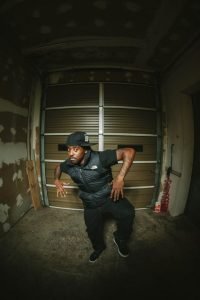 You may have taken hip-hop classes with Ricky “Glytch” Evans at our studios, but did you know that this 32-year-old from South Philly performs regularly and has made numerous appearances on international stages and national television? He’s also pretty smooth on a pair of roller skates! Read on to learn more about how Ricky got into dance, his advice for adults wanting to get started and his new Intro to Breakdancing series.

Philly Dance Fitness: Do you remember when you first started dancing?

Ricky Evans: Yes, and it was terrible! I was 8 or 9 and my grandma used to have a big boombox in the kitchen. On Saturdays, I would clean the kitchen and music would be playing on the radio, and I just started doing whatever I thought was right. My mom told me I had no rhythm at that point and I couldn’t dance. I really didn’t know what was I doing, but I was just jamming.

When did you become confident with your dancing?

It was a middle school dance, eighth grade. I saw the reaction that the ladies gave me and I knew I was onto something! I mean I was just an average kid, straight A’s, stuff like that. I was kind of little but when the school dance happened and I just started doing these moves and I noticed the attention that I got, I was like “Oh, okay, I gotta keep this going.” 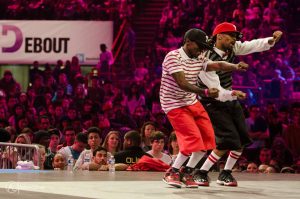 Ricky performing with another member of The Hood Locker crew at the “Juste Debout” hip hop competition.

I studied street styles — popping and locking, house, old school hip hop and breaking. When I first started, it was a hobby, but then in 2005 I joined Face Da Phlave Entertainment, a dance crew that focused on training these styles individually. We had to have knowledge in all the styles that make up a hip hop dancer’s background. That has taken me somewhere because now I’m doing a lot more teaching between kids and adults in all of these styles.

How did you get into teaching?

I was 21, doing demonstrations at different schools where we would give the history of hip hop and run after school program classes to show kids how they could use dance and other art forms as alternatives to drugs, bullying and violence. It was part of an educational grant. Even though I was still training, I got booked to start teaching because there were so many classes. My first gig was actually at a community college, it was pretty awesome. 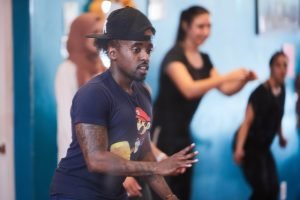 I choreograph when I’m asked to but I like teaching more than choreography because I feel like there is something more to gain from information about dance than just a combination of moves. I want students to walk away with knowledge so they can dance for themselves the same way someone would want to learn a language and be able to hold a conversation on their own.

You studied with Rennie Harris, an award-winning choreographer, dancer and artistic director from North Philly. Tell us about that relationship.

I’ve been cool with Rennie since I first started dancing. Actually, my first lessons came from his festival, Illadelh Legends, that he has during the summer. We would go to University of the Arts for two weeks in August and learn from the pioneers. About six years ago we did a tribute to the creator of locking, Don “Campbellock” Campbell, and Rennie was there and he saw our piece and wanted us to perform in this 0ff-Broadway play he had called LUV American Style. That was the first time I got to work with him. Then after we started showing up to rehearsals, he threw us into his repertoires so we would tour as part of the show. Since then he’s continued to include us in a lot of his work, and now we do different tours and hip hop theater pieces. 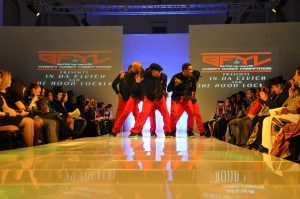 The Hood Lockers performing at the NYC Couture Fashion Show

We battle and compete all the time, all across the country. One of my crews, The Hood Lockers, was featured on So You Think You Can Dance. I’ve also gone to Paris to represent the U.S. in an international dance battle called Juste Debout, and from there started teaching workshops in Colombia.

What do you enjoy most about teaching at Philly Dance Fitness?

The variety of people that I get in my class, week in and week out. Even among my regulars, everyone is different. It’s different groups and different energies, and while it’s a challenge to fine tune things based off the people in the room, the people there make it more fun. They appreciate the knowledge I’m bringing. I like being able to connect with adults on a level that they can understand so we can all really grasp the concepts of hip hop.

What advice do you have for adults considering a dance class for the first time? 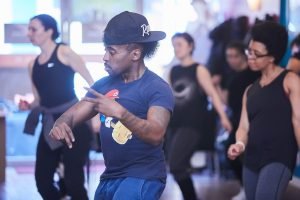 You have to approach it as if you’re learning a language and you’re learning the ABC’s for the first time. You have to make it fun. You can’t get caught up in what you think you know about the style or the class. If you come into a class and your expectations are something crazy, you kind of close yourself off. You have to let those expectations go. Dance is art, you have to be open to it and open to whatever you’re going to learn. You’re definitely going to get something good here.

What do you do when you’re not dancing?

I work overnight security at Sugarhouse Casino when I’m not teaching. Although dance is my main source of fitness, I actually enjoy working out at the gym and cooking or grilling to make some healthy and tasty meals to stay in shape. I also roller skate. I’ve loved roller skating since I was a kid, but it wasn’t until recently that I actually tried to learn different techniques and moves. I skate at least twice a week, and I like to incorporate dancing along with skating. Sometimes it’s actually more fun to skate than dance. I’m fascinated with finding the freedom to move within a space that is altered by physics, and dancing on skates is definitely a challenge that I enjoy conquering. 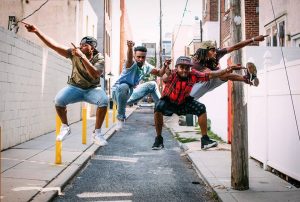 Ricky, in red, with other members of The Hood Lockers

Join Ricky at our studios for some authentic hip-hop flavor. Get started with an Intro or Hip-Hop Cardio class, or challenge your footwork at the Intermediate section. New this spring, he’ll also be piloting a 3-week Intro to Breakin’ series starting May 6. If you’ve always admired b-boys and b-girls, now’s your chance to learn some of their tricks, absolutely no experience required! Space is limited, so please pre-register to secure your spot.

Also check out the Hood Lockers music video to Busta Rhymes Ft Q-Tip – You Can’t Hold The Torch (featuring Ricky from 1:38 – 1:54). Other videos can be found on Youtube at “The Hood Lockers” or “Ricky Glytch Evans” 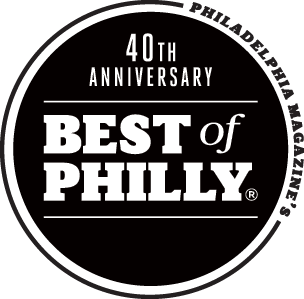