The past few months have left us all in need of a smile, and Philly Dance Fitness member Christine Olivas is on a mission to provide just that! The 38-year-old Bella Vista resident has teamed up with a group of local comics to launch the city’s first all-virtual stand-up comedy school, designed to be “empowering, transparent, fair, useful, affordable and lots of f*&^n fun!”

Read on to learn more about Christine, her latest project and how she keeps up a fitness routine during the pandemic.

Philly Dance Fitness: Tell us a little bit about yourself and how you got into dancing.

Christine: Originally, I’m from Southern California, but I’ve lived in quite a few places. When I moved to Philly two years ago from Manhattan, I knew right away that I wanted to put down roots. I actually started taking classes at Philly Dance Fitness just a couple of weeks after moving, but I’ve been doing dance fitness probably since my early 20s. Up until a few weeks ago I was a full-time marketing consultant, but I’m about to join a local software and design firm. And then obviously I’ve been hard at work on the comedy stuff, including Off Mic!, the school I just launched!

So you’ve been holding up alright during the pandemic?

I’ve struggled a little bit with some of the virtual replacements, just because I’m really extroverted and I like interacting with people. It took me a few weeks, but I eventually realized that if this is how it’s going to be, I’m going to adapt and use this to my advantage by focusing on a bunch of projects. But I was super excited when the Philly Dance Fitness Midtown studio opened up again, and that’s why I was one of the first people there! There’s just something about the energy of being around other people and hearing the music live versus being in your home that’s really exciting.

So how did you first get into comedy?

I was a writer before ever doing anything formally with comedy, and I had a lot of short stories published, plus I’d done singing and musical theater. I was just craving something that was a little bit more honest. Part of the problem with fiction is that you’re creating a character and you’re getting into their world, but you’re not necessarily telling your own story. So I was craving an opportunity to be more forthcoming about some of the wild experiences I’ve had in my life, like being homeschooled, being in a cult, and lots of other crazy things! I’d been thinking about trying comedy for a bit, then I decided to pull the trigger early last year and took my first in-person class at a theater here in Philly. Now I do comedy that’s first-person storytelling, which is basically standing up and telling a very short, entertaining story to try and make people laugh. 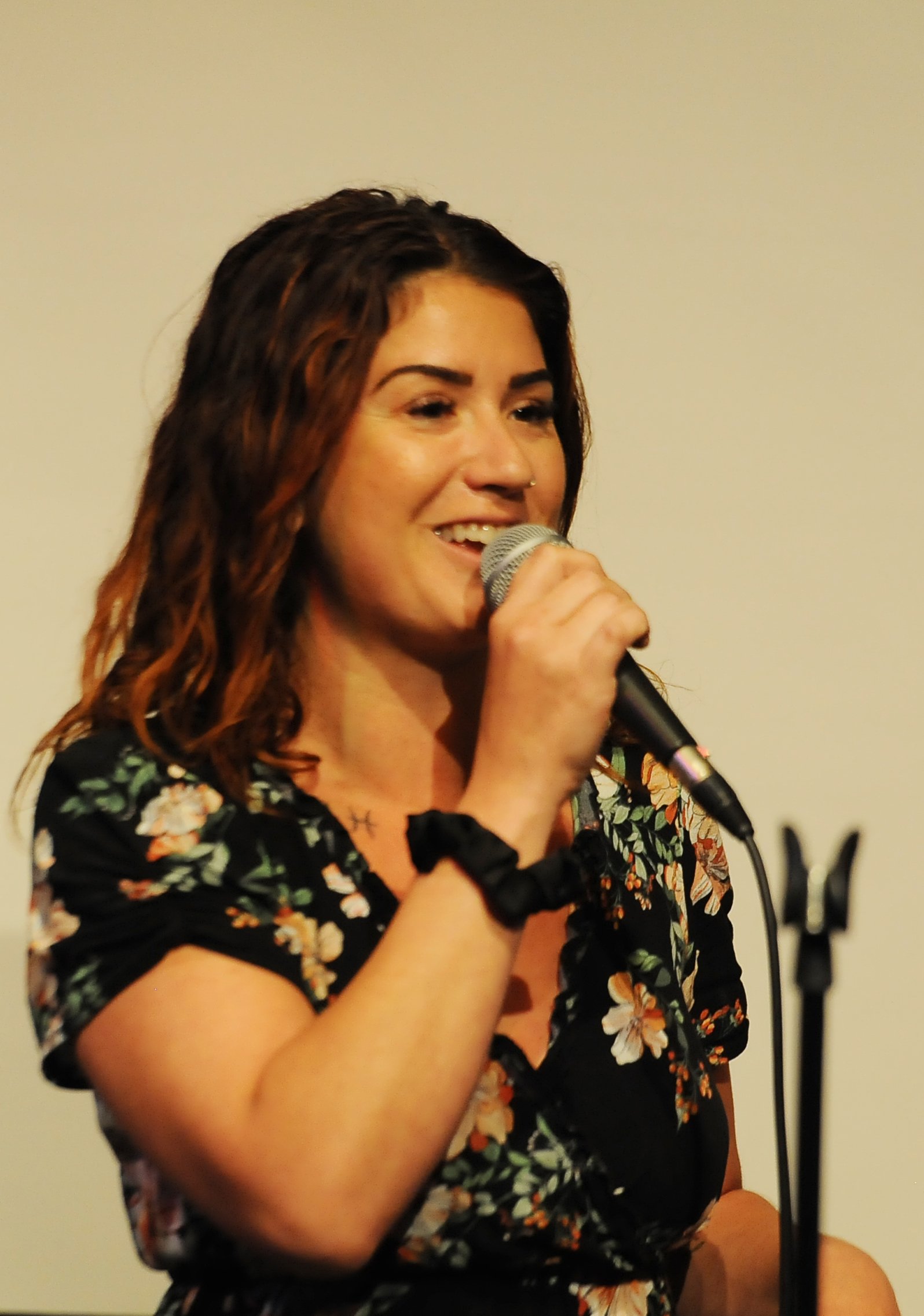 How did you decide to open a virtual comedy school?

A few weeks ago I just had the idea, and I was afraid that if I waited too long, someone else would take it! I know a lot of really good comedy instructors from taking their classes and performing. It felt like this was the time to bring it online and give people the chance to do it from their homes. Not just because that’s safer, but also because it might open it up to people who wouldn’t have otherwise been able to do it, like moms or people in other parts of the country who don’t have in-person options in their cities.

Why is making comedy training accessible so meaningful to you, and what does that kind of inclusivity look like in practice?

On one hand, I think of accessibility as not framing comedy as an art that’s only available to certain people. There’s this misconception that you have to be a super funny person or very extroverted to succeed at comedy, and that comedy can’t be taught. I mean, you can’t go into it with no sense of humor, no observations on the world, or no willingness to put in the work — but it’s not something that’s under lock and key either. I really do believe that if you look at the world in a certain way, like paying attention to details, noticing the things that are funny to you, and noticing the things that are interesting or contradictory, and then get some training, you can do it. The second form of accessibility is the cost piece of it, and the third is just including a lot of different perspectives. All of the instructors come from pretty different backgrounds and careers, and by creating a group of folks that have very varied experiences, I think you’re inevitably going to make it feel like a safer space for folks.

If you had to give one piece of advice to an aspiring comedian and another to someone starting a dance fitness journey, what would you tell them?

My advice would actually be pretty similar! I’ve never traditionally been told, “Oh she’s so funny.” That probably wouldn’t even be in the top ten adjectives to describe me, and to be honest, I wouldn’t consider myself a naturally good dancer by any means. But what they have in common is that if you just keep doing them and let yourself go a little bit, you can do it.

Part of what makes dance classes so amazing is that you’re following really fantastic instructors who know how to help the class feel empowered. And then one day you wake up like, “Oh, I actually can do it, I’m not that bad!” Similarly for comedy, I started doing it and all of a sudden my instructor said, “I think at some point you’ll be really, really good at this.”

A lot of it comes down to just giving it a shout, and then surrounding yourself with people who know how to do it in a way that feels open to others. It’s always fun to realize that you’re better at things than you thought!

We can definitely agree with that! And you’ve been to a few in-person classes at the studio recently, right? What was it like to be “back”?

Pretty amazing! It’s very safe, very spread out and very cool inside. I would encourage people to join me, assuming their health conditions allow them to go back out. I appreciate dancing in-person in ways that I hadn’t before.

Off Mic classes begin October 1. Find more info on their website, Facebook page or @offmiccomedyschool on Instagram. You can also watch Christine perform at a September 16th Fringe Festival show or read some of her writing at christinesgotstories.com.

— Interview by Katie Vaughn, edited for brevity and clarity